We were looking for a way to make our video content smoother, as well as have the ability to do motion timelapse sequences, when we discovered the Grip Gear Director Kit. Given that we always travel pretty light, neither of us likes a pack any bigger than 20L, any gear we buy has to be compact and portable.

Most motion track systems seemed to start at about the £350 mark, with motorised options adding hundreds to that, and we’d looked at motorised dolly systems but they are not particularly suited to the outdoors with uneven terrain.

Not far from giving up and putting the idea on the wishlist, we stumbled across a YouTube video of someone using the Grip Gear Director Kit.

After a quick google we found the kit on Amazon for £109 and to be honest it looked too good to be true, so we ordered one straight away. We subsequently ordered more kits direct from Grip Gear, as we like supporting independent businesses.

For us this was the key reason for buying the kit in the first place, and it has actually done more for our footage than we thought already.

The tracks are completely customisable, in that we can use one single piece of track and also link up any number together.

Coupled with our GoPro Hero 7 Black action cameras, we have all the motion we need.

The dolly is the fiddliest part of the kit to set up and for us is the least used as we rarely shoot video in places that have perfectly flat surfaces.

The motor sits inside a cradle with two adjustable wheels, the 360 adaptor clips on the side, then the larger wheel screws over that.

For shooting product videos or anything desktop based this is a fantastic little tool. The motor’s full range of speeds can be used and the turning circle can be infinitely adjusted.

This is our go-to piece of the Director Kit for quick trips out or running days.

Using only the motor with the small 360 adapter and any basic tripod means we have a super easy and quick way of shooting timelapses over big landscapes on the move.

Anytime we sit down for a relax on the trails this is the first thing that gets set up. 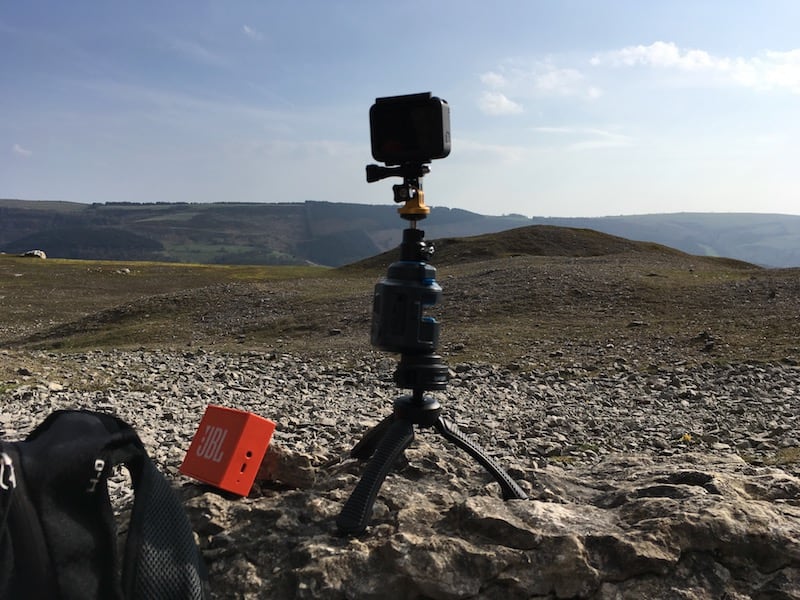 The Grip Gear motor features an incredibly simple 1-9 speed setting. It can be set in either direction, manually or by the included remote control, and also set to bounce back when it hits the end of the track.

Each track connector bar has the time settings printed on the side for both mm/sec and min/track.

When using the standard two track system this is a foolproof way to time footage. 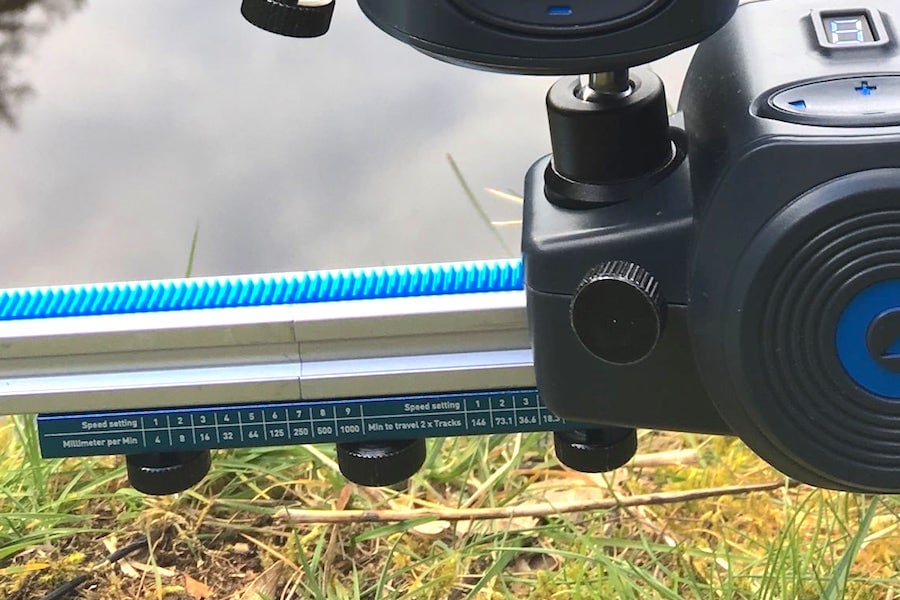 The slowest settings are naturally the best for timelapse, coupled with a long interval on the camera it’s easy to create dramatic senses of movement.

When we stack two motors, the 360 camera is nearly always on setting 1 or 2 with the slowest blue spin attachment.

We’ve found our best footage comes with the linear motor on speed 3 or 4, with 5 second camera intervals.

Short clips with natural movements are captured well with the higher speeds of 8 or 9.

When we film action sequences for climbing or running it’s important to give the feeling of motion across the shot.

Tracks can be linked together and run at strange angles, even diagonally or upside down, meaning the creative possibilities are wide open. 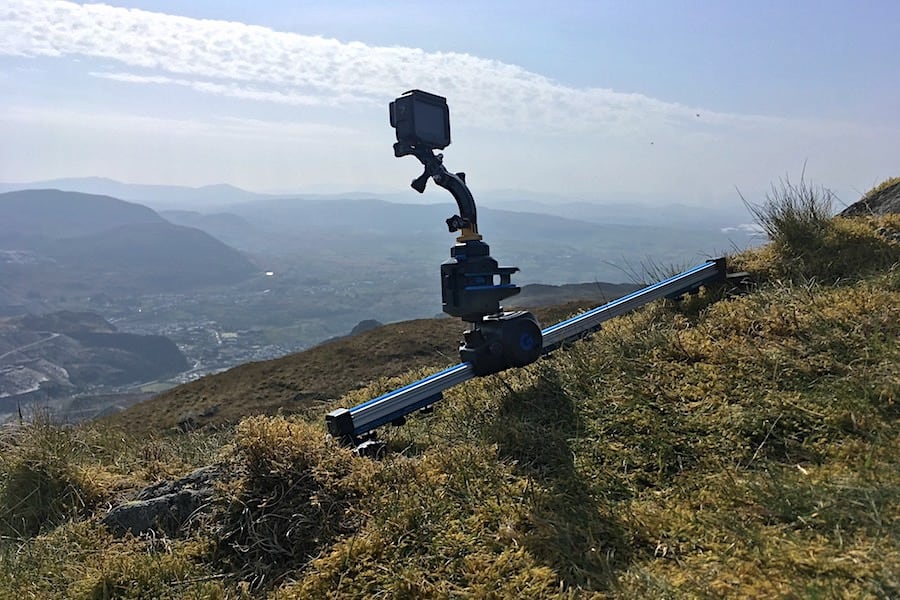 OK, so a single Grip Gear Director Kit on it’s own is a ton of fun for anyone, no doubt. But we could see more possibilities, so we got quite a few more kits…

Having a timelapse move truly brings the footage to life, but we wanted to rotate the camera at the same time, so we stacked two Grip Gear motors together.

One goes on the track, the other mounts to the standard camera thread. We use the 360 fitting on the second cam with the GoPro on top.

This means as the first motor moves in a linear motion, the second rotates, giving a 360 distance view while retaining quicker movement in the near field.

Grip Gear sell extra tracks, but in addition we simply unscrewed the fixed feet from the ends of the main kit tracks when we got multiple sets, meaning they can be linked together endlessly.

There’s a simple blue aluminium joint with thumbscrews to join the pieces, and the feet simply pull on/off for custom placements. 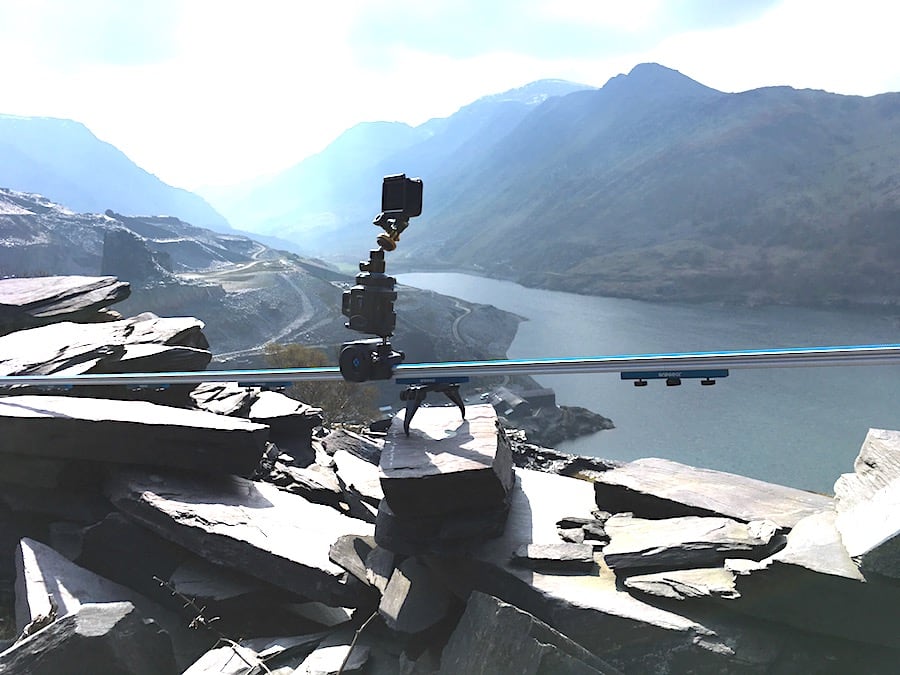